The completely new approach from LG in 2020, The Product LG Wing has just been announced and LG took some serious design changes for this product. We have seen flip phones slide phones, but this dual-screen phone has a sliding mechanism both the screen is OLED panel.

The manufacturer of LG takes the design to the next level, the LG wing has a highly innovative design in the smartphone industry. There is a pop up 32 MP front-facing camera at the top of the phone, The front screen has the functionality to pop out and rotate perpendicular to the back screen so it looks like this. 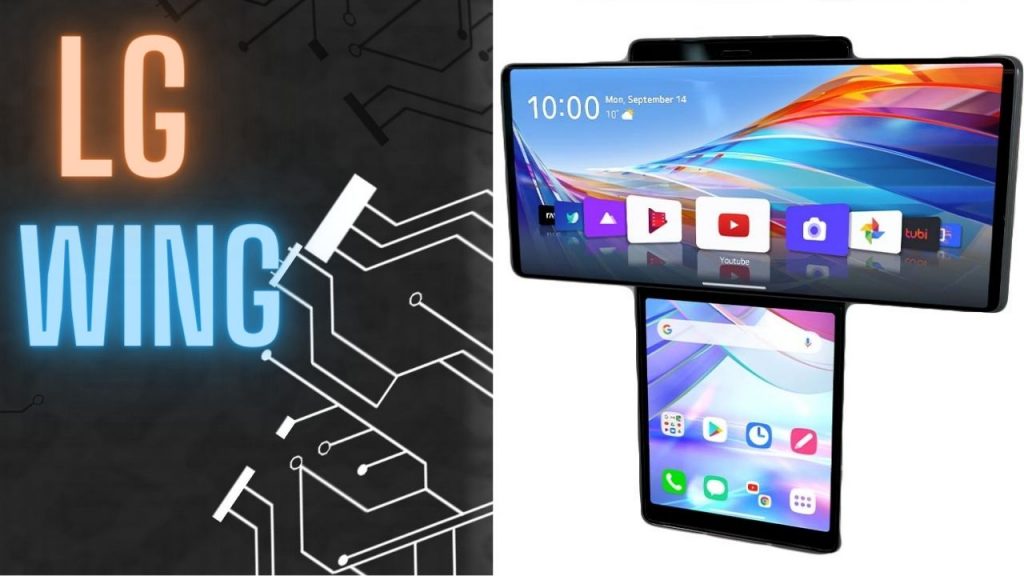 On the other hand, the LG wing is coupled with Snapdragon 765G 5G Chipset, 8 GB Ram, 256 GB of storage, and a 4000mAh battery. Full-day battery life with a dual-screen. The chipset is not a gamer-centric or flagship level, but LG is aiming towards better camera experience.

Furthermore, In the back of the LG Wing featuring the Main camera of 64 MP, 13 MP of Ultra Wide, and the third one is the Ultra Wide 12 MP Gimbal Motion Camera which helps with the stability of the Photos as well as video capture of the phone. Also, the secondary screen is used as a grip while recording or capturing.

The secondary screen gives the Joystick capabilities for the camera, for controlling the camera angle, including lock mode for better stability and performance.

The phone LG Wing can use in Swivel mode with both the screen working together. One screen for one application another screen for another application.

The developer can take this as an opportunity to create and optimize the application for this phone.

One of the early LG prerelease clips shows the main screen use as GPS navigation while the second screen uses to handle calls and music.

There are not so many apps that are optimized for the phone but in the future, we can see some more application takes the better advantage of the secondary screen.

The company offers Multi-Application features as we have seen in Samsung galaxy fold and Microsoft Surface Duo. additionally, it will make multitasking much easier you can browse the web and watch videos at the same time without any interruption. Also, you can open navigation and watch your favorite media altogether. You can create your shortcut to open the application from the secondary screen.

LG also took durability seriously and claims that the rotating hinge mechanism can last up to 200K swivels. Which means you can open it more than 100 times a day for five years. also, they added a special material to the back of the main screen to protect the secondary screen from dust and scratches and gives smooth pop-ups for a better user experience.

One of the main reasons people will love this device is because of its Ultra Wide 12MP Gimbal Motion Camera. On the main screen, you can start recording and from the secondary screen, there is a joystick controller that you can use for changing the camera angle. The fixed-focus mode is also amazing. You can focus the camera on a particular object the camera will follow the object.

The Gimble camera will attract more vloggers that use to vlog using their smartphones.

This LG Wing gives you video stabilization and more option to create content in a fun way.

To summarize, the new swivel looks the most innovative design and experience ever. It makes multitasking and multi-viewing experience more exciting. for instance, you can use both apps vertically and horizontally. This swivel is never seen before in any smartphone.

Both the display is OLED Panel viewing angle are always great in OLED Displays.

The most durable hinge, water repellant, and also anti-dust technology is use in this smartphone.

Make use of both the camera at one time with the dual recording feature,

Picture in picture mode or split-screen mode as separate videos

There is no need to switch apps for reading or sending messages in other applications. While watching Netflix, you can message anyone you want without any interruption. You can check any notification, surf the internet, or go live with ease. Multitasking is fun in the LG Wing smartphone.